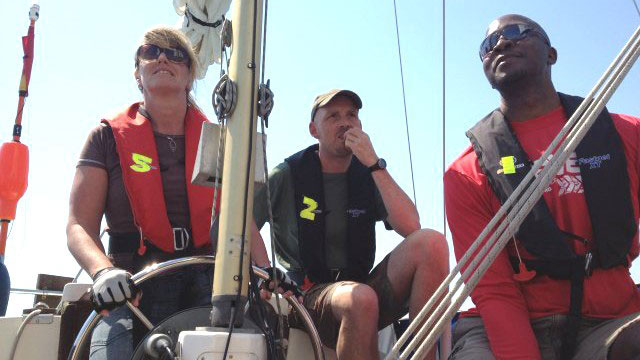 A personal experience by Andrew – “If you can learn to sail in The Solent then you can sail anywhere in the world”, claimed Jason our sailing instructor as we tucked into chips and veggie burgers overlooking the busy Portsmouth harbour. Too tired and exhilarated after our first day aboard sailboat Karic, owned by vegan sailing cooperative The Sailboat Project, to want to cook in the galley we had left her moored at Gosport marina and headed out to find some food and a beer to discuss the day’s events.

What he was trying to explain to his four crew members starting The Black Fish competent crew member course was that the waterways we had just sailed through on the south coast of England were one of the busiest and complicated tidal stretches of sea to sail on in Europe.

By the end of our training week we were able to steer the boat, handle the sails and ropes, tie nautical knots, understand the important rules of the road, deal with a man overboard situation, and generally become competent and comfortable with life and general duties onboard. It was a steep learning curve as we lived and sailed on the yacht in all conditions but one that will stand us in good stead for any future hands on marine action we may be involved in.

Over the next 5 days we negotiated tidal waters, cruise ships, ferries and sailing regattas, and visited the world renowned yachting destination of Cowes on the Isle of Wight. We berthed in and negotiated marinas, anchored overnight in sheltered waters and took early morning swims from our anchorage.

We stopped for provisions at small historically important maritime villages such as Emsworth where the huge nineteenth century oyster fishing industry was decimated and collapsed as a result of sewage pollution in 1902 – an early warning of the future damage that the seas would face from our extreme exploitation of them in the twentieth century and today.

We plotted a night passage through the busy Solent and learnt about different marker buoys and night lights. In the evenings we cooked and ate great vegan dishes and sat in the light of the cabin discussing marine and environmental issues, reviewed what we’d learnt through the day, and even sang sea shanties one night as our laughter carried across the still dark waters.

The camaraderie of our instructor and fellow crew members was special and I came away with a Royal Yachting Association certificate and a greater knowledge of the seas and how to operate within them. I was honoured to be selected for the course by The Black Fish and it was an invaluable week that gave me skills that I will undoubtedly use in my future work as a small part of the massive ongoing struggle to save our oceans.